By Monica Garcia and Jared Barton / Reprinted from The Columbus Telegram – Date: June 18, 2022

A new, rather unconventional gazebo is going up at Camp Pawnee.

Camp Pawnee, one of the three recipients, was awarded $10,000 for its project creating an entertainment pavilion. Said project is set to be completed within 18 months. The pavilion is unique in that it is made from the top of a grain silo. 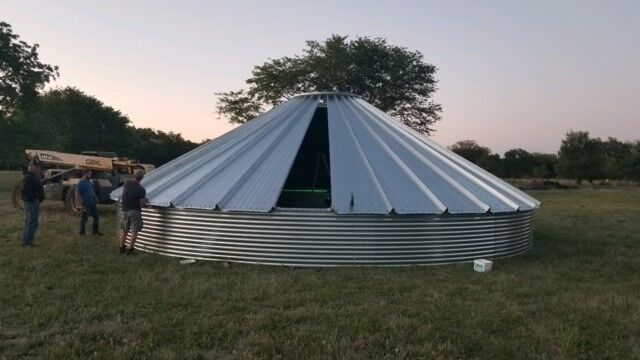 (Pictured is the grain silo gazebo, or shelter, being constructed at Camp Pawnee. The gazebo will be usable for weddings, parties, family reunions and other outdoor events. Courtesy Photo)

Board member Jane Tooley said the next ﬆeps to complete are getting concrete poured and removing the metal band that holds the ﬆructure together.
“There’s a band on it now that is holding everything in place until we complete the concrete and then that will come oﬀ,” Tooley said. “We’re ﬆill talking about that.”

Camp Pawnee is open to the public from May through September. There are camping fees for those who utilize the camping spots, and are on a ﬁrﬆ come ﬁrﬆ serve basis. Currently there are eight spots with power and water and two with only power.

“Laﬆ year we ﬁgure about 3,500 people used the camp. Moﬆly locals but we have a lot of people that are traveling through and call and want to camp there,” Tooley said.

Tooley added that following the ﬂood in 2019 that damaged the campground, the city helped them rebuild.

“The City of Columbus was very generous with us. We have gutted and rebuilt moﬆ of the buildings, redid the insides, we rewired it so everything is up to ﬆate code,” Tooley said.

The project also came with some help from Behlen Mfg. Co., who gave Camp Pawnee a deal on the materials.

“Behlen Mfg., they sold us the grain bin, all the materials except concrete, at a very reasonable price, at a very reduced price I should say,” Tooley said.
The camp was founded 103 years ago by the YMCA for their use, but eventually became a privately-run nonproﬁt, operated by an advisory board.
Katy McNeil, director of the CVB, said the camp is already beautiful, but that this is a change she’s glad for.

“It is wonderful to see the Camp Pawnee Advisory Board being forward thinking and looking for ways to improve their facilities and make their camping location a deﬆination,” McNeil said.

Improvement grant applications are open between Sept. 1 through 30 each year. The funds for the grant program comes from a 2% occupancy tax on Platte County lodging businesses like hotels, Airbnbs and campgrounds. The funds are awarded for projects which improve, create or enhance visitor attractions, McNeil said.