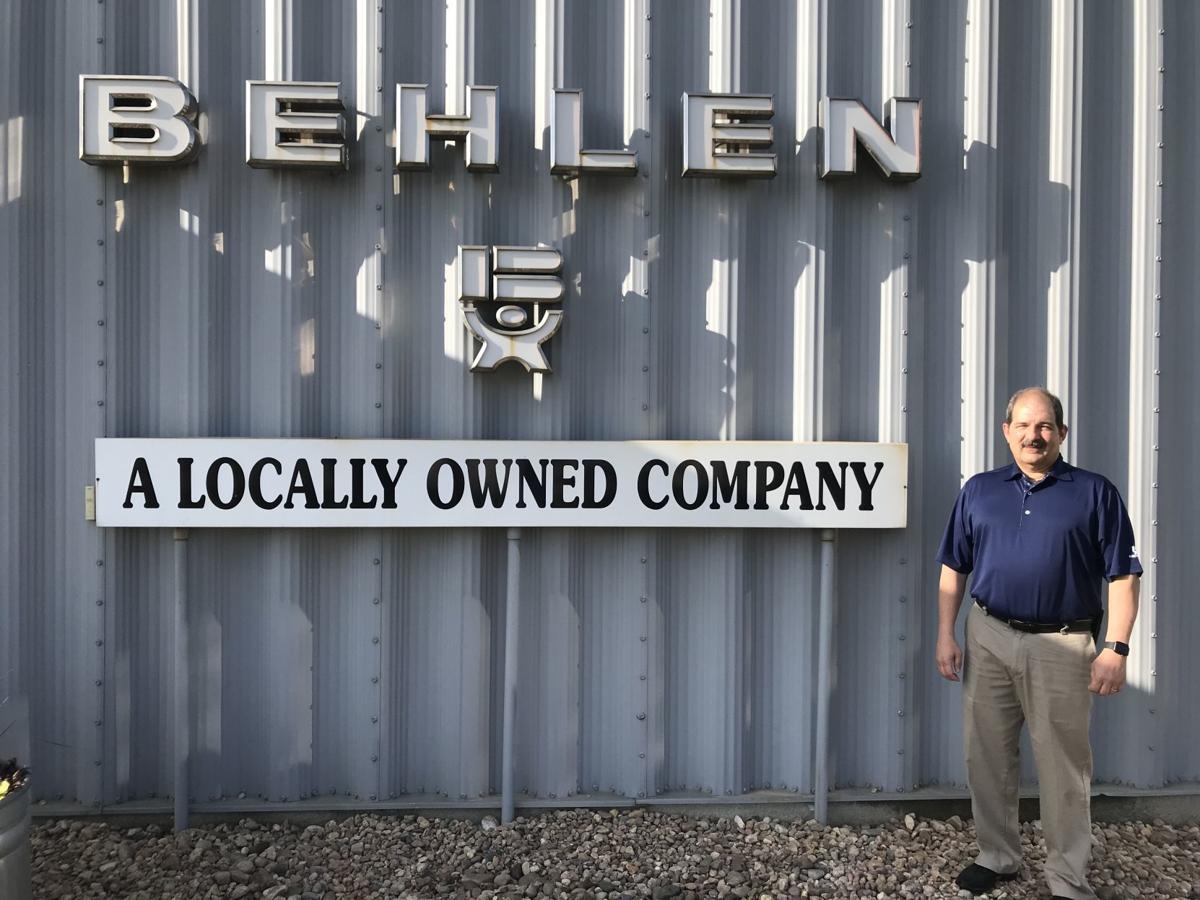 Behlen Mfg. Co. President/CEO Phil Raimondo poses outside the Columbus facility. This past week the company celebrated 35 years of being locally owned.

When Tony Raimondo, Dick Casey, Bob Theilen and Steve McGill orchestrated a leveraged buyout to purchase Behlen Mfg. Co. in 1984, the company was experiencing its fair share of pains.

The 1936 Columbus-founded company now has five facilities spanning three states, employing more than 900 people. But in the 80s, the goal was simple: just make sure Behlen can keep its doors open.

“They didn’t really have longevity on their mind,” Behlen Mfg. Co. President/CEO Phil Raimondo said of when the buyout occurred. “It was really, ‘How do we save this company? Because we are in a lot of trouble.’ We had gone from being a really profitable company to not being one, after the government passed the PIK Program to pay farmers to not grow crops – we were primarily a grain bin company.

“It was a huge hit and it cut the revenues in half. I wasn’t involved at the time, but I would hear things, like at family events, that Behlen was struggling.”
Struggle is no longer a word associated with Behlen Mfg. Co., a company that is considered to be a global leader in steel fabrication. With a goal of reaching the $200 million revenue mark, the company is not only maintaining its clientele, but adding new business all the time. And, all of this is being done with the Raimondo family retaining local control of the company.

On Tuesday, the company and its approximately 600 local employees celebrated the 35th anniversary of the company being owned locally; a gathering that included employees’ families, state and local chamber of commerce representatives, District 22 Sen. Mike Moser, Mayor Jim Bulkley and many, many others.
It was a time for everyone affiliated with Behlen Mfg Co. – employees, upper management and the community at large – to soak in a memorable moment. One of the major turning points for the company in the 80s was a shift that allowed for employees to feel like they were cared about and part of a winning team. A team that knew their worth and truly valued them.

“The leadership team decided that they were going to win with people,” Raimondo said. “Some of the initiatives they took were getting rid of time clocks and using an honor system. That was a key piece of getting rid of time clocks and making people understand that management trusted them, and we wanted people to trust our management at the same time. So, it really was a two-way street in a lot of ways.”

Since then, Behlen employees (Partners in Progress) have been getting kept in the know in many ways. One of which is having a pizza lunch with the leadership team during their birthday month to ask questions, provide feedback and just have a good time in general.
Columbus Area Chamber of Commerce President Jeanne Schieffer said that Behlen Mfg. Co. and the Raimondo family made all in attendance during Tuesday’s festivities feel welcome.

“Not only did Behlen roll out the red carpet for the community, they really made us feel like we are part of their family,” Schieffer said. “They are just the epitome of what good business is here in Columbus, and frankly, also nationally and globally … They (the Raimondos) are just such a gregarious and welcoming family, very down to earth and make everyone they associate feel comfortable and welcome.”

Mayor Jim Bulkley, who addressed those gathered Tuesday afternoon, echoed similar sentiments.
“I just think that it’s a testament of Columbus and the values we try to portray – it’s what we are all about,” Mayor Jim Bulkley said of the Raimondo family and the business they have continued developing and growing. “You have a family-owned business that has persevered and made it through some good and bad times because of their family culture. And it’s the same thing that they have instilled in their workforce.”
Bulkley added that Behlen employees are heavily active in many facets of the community and that Columbus spirit is alive and well within the company’s walls.
“They encourage them (employees) to be a part of the community,” Bulkley said. “I think it’s, again, a testament of what they do. It’s what we try to do as a city, it’s one and the same.”

Raimondo noted how Columbus is a great place to raise a family and grow a company. Columbus-bred people are the ones who have helped grow the Behlen operation into what it is today.

“First and foremost it’s the people, and the ability to have great relationships with people,” Raimondo said of what makes Columbus an ideal place to station Behlen Mfg. Co. headquarters. “And the work ethic is second to none, I really think in the world … and it’s just a really exciting thing to be part of.”

Sam Pimper is the news editor of The Columbus Telegram. Reach him via e-mail at sam.pimper@lee.net.