Behlen moves on acquisition track for proximity to customer base

Behlen Mfg. Co., a Nebraska-headquartered global manufacturer with a diverse mix of agricultural and non-farm re­lated products and annual sales of $198 million last year, is seeking to cement growth opportunities in the southeastern U.S. with its merger last month with Trident Building Systems of Sarasota, Florida.

“Being flexible continues to be an important part of our survival and success,” said chair­man/CEO Phil Raimondo. Raimondo oversees the fam­ily-owned Behlen group of three business units that employ 1,180 people. Of that number, about 700 work in Nebraska – 590 of them at the firm’s corporate headquarters and sprawling pro­duction facility in Columbus. A southwest Omaha plant, Behlen Technology & Manufacturing at 3838 S. 108th St., employs 60.

“While we don’t have anything on the horizon at this point, we’re always going to be looking at people and companies doing similar things that are complemen­tary with high quality manufacturing,” Raimondo said. 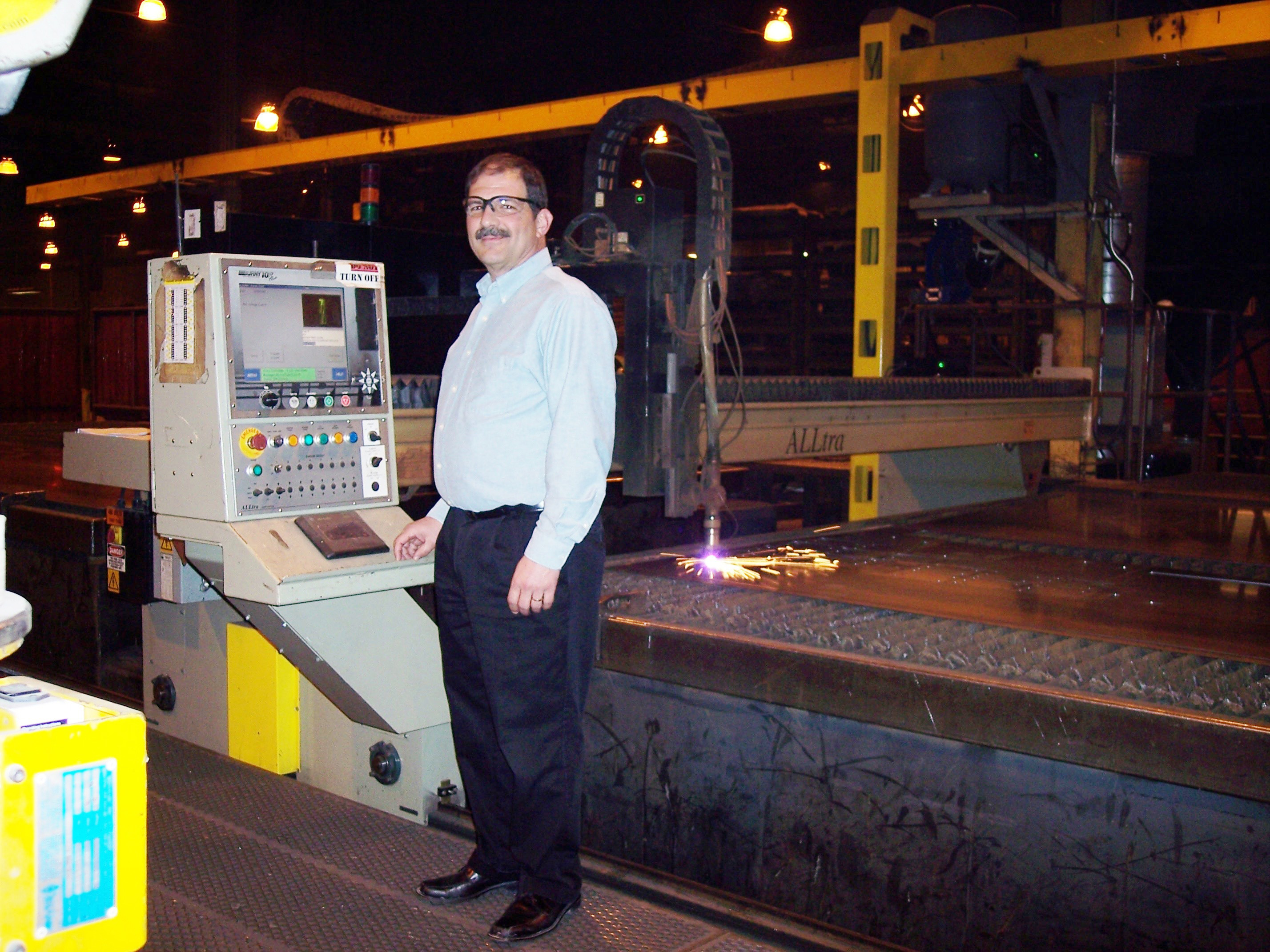 (Chairman and CEO Phil Raimondo with an Alltra CNC control plasma table that is used for cutting webs, plates and clips . . .Growth reflected through merger.)

As the 84-year-old Behlen Mfg. Co. seeks to become more competitive beyond its Nebraska roots, the plan is to seek acquisitions and other agreements in strategic locations throughout the country that enable it to build its products in closer proximity to its customers and end users.

Raimondo, who has an electrical engi­neering degree from Purdue University and an MBA, said the Trident merger positions Behlen to hit $220 million in annual ship­ments this year. Its previous record was $213 million in 2007.

With the Trident transaction Behlen assumes a 34-year-old family-owned firm that makes a full line of quality pre-engi­neered and structural steel buildings from a 115,000-square-foot manufacturing plant.

He said Trident sales were in the $25 million range last year. “It’s important for us to expand the market in Florida and get the Behlen name out with our level of service to the area builders and general contractors down there,” he said.

“We’re experienced in creating de­signs for manufacturers with efficiencies built in,” he said. “This enables us to find solutions to even the most challenging production specifications.”

“It offers speed improvement on the put-through and reduces overall costs by 20%,” he said.

Employee training has been important in integrating a computer-controlled press to work in tandem with laser technology to achieve better flow-through. This is achieved by moving raw parts together through the press.

Tooling capabilities have been enhanced with the addition of a sharpening drill.

The plant, housed in the former Nash­ua Corp. building, was formerly known as Distefano Tool & Manufacturing – a then family-owned business located at 30th & Browne streets in north Omaha. Behlen acquired the firm in 2009 and moved it to its current location.

It was Behlen’s first major acquisition under the ownership of the Raimondo family.

The Omaha plant is operating near 70% capacity and Raimondo hopes within the next two years to add a second shift and increase staffing to 90.
Looking at the Behlen family of companies holistically, Raimondo said the company is positioned as a diversified venture that has had success in both the agricultural and non-agricultural sectors. If one sector is lagging, the other holds the firm up.

“We want to get our owner numbers up to 100 this year,” Raimondo said. “Of that number, about 50 live in Nebras­ka while the others live in places such as Oregon, Idaho and Tennessee.”

He also hopes more operators can be recruited near the newly-acquired Florida facility.

Variables closely watched by Behlen ownership and management include the value of the American dollar and raw material prices.
“Steel prices are getting back to a more reasonable level now,” Raimondo said.

“Teamwork and change,” Raimondo said have been important to Behlen’s growth since his father T.R. (Tony) Rai­mondo became majority owner of the company in 1984. The elder Raimon­do, 79, is now chairman of the board emeritus.